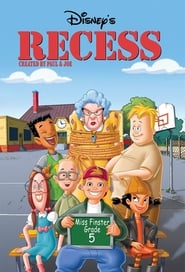 Recess is an American animated television series created by Paul Germain and Joe Ansolabehere and produced by Walt Disney Television Animation. The series focuses on six elementary school students and their interaction with other classmates and teachers. The title refers to the period of time during the school day in which children are not in lessons and are outside in the schoolyard, in North American society. One of the main features of the series is how the children form their own society, complete with government and a class structure, set against the backdrop of a regular school. Recess first aired on ABC from 1997 through to 2001, and reruns aired on Disney Channel in the United States. The success of the series saw it being distributed to numerous countries around the world, notably the United Kingdom, where it aired on multiple channels including Toon Disney and Disney Channel UK. In 2001, Walt Disney Pictures released the first of two films based on the series, Recess: School’s Out, which was distributed theatrically. It was followed by a direct-to-video second film entitled Recess Christmas: Miracle on Third Street that same year. In 2003, a third film entitled Recess: Taking the Fifth Grade was released, along with Recess: All Growed Down. Both were also direct-to-video. The characters also made an appearance in an episode of Disney’s Lilo & Stitch: The Series.